Inaugurated in 1990, the Espace de l’Art Concret is located in the commune of Mouans-Sartoux. It has three main areas of activity: conserving the Albers-Honegger Collection, programming temporary exhibitions in the Galerie du Château and in the Collection, and educational work. Also a residence, for three months the EAC welcomed novelist Emmanuelle Pagano, who wrote a text echoing a selection of works. This text offers a fictional vision of the collection as part of a stated commitment to openness and dialogue between different artistic fields and the public.

I’ve never been to space. But I’ve always dreamed of doing so. My dreams haven’t stopped looking at the sky. Sometimes I watch my childhood night-light shining aloft, Venus, and I think of my little sister of a few minutes. Between Venus and us, between Venus and my past, I’ve placed a lamp, another lamp, in Earth’s orbit. My illuminated adult light. Keeping watch over our sleep. It’s turning somewhere in the night; not to see in the full darkness, but to enlighten us, enlighten our knowledge. To know. Floating up high to examine the sun, it blinks as though a reminder, so that I don’t drift too far from my childhood dreams. 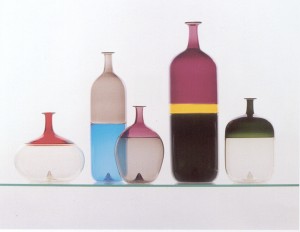 I am a glass blower, like my father, like my grandfather, my great grandfather. I love working with glass, it becomes full of life under heat. From this magic material it’s possible to make so many things, endlessly fashion it, give it any shape. One only has to stop it from yielding to gravity, Earth’s crushing call. In our family we have been defying gravity for several generations. We gather a precisely measured drop of glass at the end of a hollow stem that we call the Cane, and while withdrawing the Cane, we remain rotating our arms in order to negate the effect of weight, contradict it, prove the Earth wrong. In so doing the glass is prevented from stretching. Roundness is a grace. Our gestures are like those from an Indian pantomime, the small torsions of Bharata natyam, our fists dance so that the earth doesn’t beckon the glass to its feet. When younger I wanted to be completely free from it, from gravity, I wanted to become an astronaut. Become the glob of glass carried by my father’s airborne fist. But my parents had their feet on the ground. To be an astronaut you had to go into long-term education, to go into long-term education meant going far and far was too expensive for them. They wanted me to work at their sides and take on the business, this small artisanal business where my father fashioned glass with wonderful movements, where my mother was the secretary-accountant, and which was their pride and joy. My pride though is my lamp up high, on board the international space station. Before, my pride was my sister, my sister of a few minutes, when she sang only for me, stood on her bed next to mine, dancing on her bed identical to mine. Slightly rounded and so gracious. 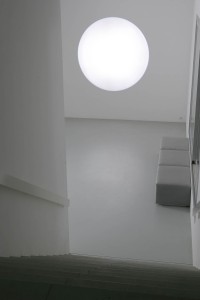 I haven’t landed far from my childhood dreams. Sometimes I say to myself that I haven’t fulfilled my dreams to the end, that I should have worked harder at school, confronted my parents, left for the city for long-term study which would have led me to the stars. I never opposed my parents, I didn’t have the courage. I wasn’t scared of them, no, I just didn’t want to disappoint them. Every evening I gazed at Venus, I spoke to her. I entrusted her with my doubts, regrets, and I think that’s what I needed. My parents had enough on their hands with my sister, who was slipping through their fingers and did what she wanted. Nebulous, beautiful, scatter-brained, my twin sister, my little sister of a few minutes.

A few minutes and then it’s already the past. All our experiences, movements, and glances take place in the past, even if only by millionths of a second. There’s always a gap, because the light takes time to reach us. Let’s not even talk about sound. My sister’s voice, stood on her bed singing, so distant. I wonder if it wouldn’t be quicker to go to Venus than to re-join my past. 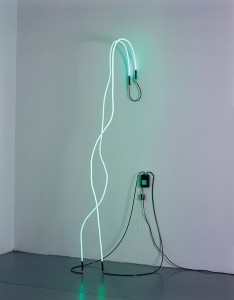 Venus is the planet of the solar system which most resembles the Earth. In appearance. Now we know it’s not so similar. When we knew it less, in days gone by, it was called ‘Earth’s twin’, because it’s of a similar size, almost the same weight, and like Earth, it’s permanently covered by glistening thick clouds. It’s these clouds which make it so bright in the sky, so bright that it’s called ‘l’étoile du Berger’ (the shepherd’s star), because it’s visible from dusk, and at dawn as well, in the sleepiness of late nights. But it’s not a star, everyone knows that. My sister wanted to become a star. She had little comets in her eyes, large gestures, she searched for the blind stare of the spotlight. She sang, she danced and she stayed up late. My parents wanted her to study to become a secretary or an accountant. So she left, she fled. She trawled through auditions, believed in the cheap Saturday night club and bar contracts. She did her show on the ‘wet t-shirt’ nights. She met so called producers. She wanted to break-through. That was her expression, her verb, ‘break-through’, that she sometimes replaced with ‘to shine’. She used to say that she would have a stellar future, as long as she could leave here. She wanted to escape the provincial atmosphere, the heaviness of the countryside air. She used to say that elsewhere it was buzzing, everywhere else, anywhere else.

Venus is the object of the solar system which is the brightest from Earth, after the sun and the moon. Everyone has already seen Venus, even if they didn’t know it was Venus. On the surface it’s very hot, 470° on average, whether you’re at the equator or the poles. The clouds were always believed to be like ours, clustered droplets of water, but no, not at all. My sister never became a star, just lost. She dreamt, she smoked, she drank, she took stuff, she soared. She returned to the house to steal things so she could soar again. Venus’ atmosphere is essentially carbon dioxide, and the clouds are inflated with sulphuric acid. The air on Venus is very toxic. It’s covered with a gassy ocean, a thick atmosphere, responsible for the unbearable heat. The place in the solar system which most resembles the Earth is there, in the clouds of Venus, but the vitriolic clouds are unbreathable. I tried to defend my sister, my little sister, younger by hardly a few minutes. 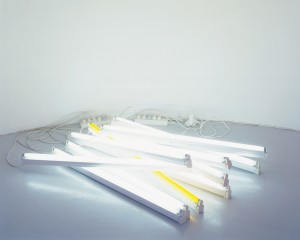 I no longer spoke of my own dreams: to understand the space discovery programs, to go to Venus. My sister knew my dreams, she chose the name Venus as a stage name, she chose it for me, except she never did any scenes, or rather she did scenes, but she was never really on stage, and I never went into space. It doesn’t take long to go between Earth and Venus, it’s our closest neighbour, it only takes a few months, three or four if you go about it right, if you follow the right trajectory. To go to Mars you need six and ten to fifteen years to go to Neptune or Pluto, so Venus is very close, so close.

I left. I didn’t take on the business. I live and work in the Paris area, in a laboratory, a lab which undertakes advanced research, internationally recognised, and which employs two hundred people. In the family business there were only two people, the owners, my parents. I blow glass how they taught me, with the same blue glasses, to block the light radiation emitted by the glass being worked, most often made from Pyrex, which give off a strong yellow light. Strong light shouldn’t be trusted. Without these glasses it would be impossible to see what’s happening in the flame. They protect my eyes from cataracts. My sister died, fifteen years ago, a result of Aids. I left the house just after she died. She couldn’t sing anymore, couldn’t dance anymore, she had gotten ugly thin, in the last months she was blind. 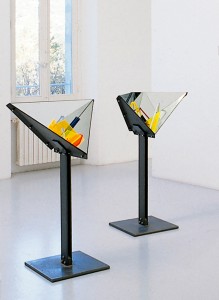 at night, the station is visible, it’s more or less the size of a football stadium. And in the station, my little lamp looks out. It’s travelled a long way since I let it go. I fashioned it in my workshop, then it was integrated into an instrument which measures and analyses sunlight, it’s intensity, the spectrum of different colours from its light, to understand the chemical processes and dynamics of our star. Venus isn’t a star, my sister never became a star, she never left, and she doesn’t shine from on high. I’m not religious, she’s in the Earth, in total darkness. Those who study space, we know that we don’t see things at the moment when we see them. The present doesn’t exist. The past is the main tool of astronomers, they unceasingly manipulate it, they live inside it. The only present is in our thoughts. To think is to get as close as possible to the absolute present, but our thoughts, our emotions, our memories, take time to travel in ourselves, to be distributed between our senses. To observe space is to watch what’s already happened, observing space is always nostalgic. I see the silhouette of my little sister, my little sister of a few minutes, dead for so long now, stood on her bed dancing. She still dazzles me. Super-novas are insignificant stars, that in their lifetime we don’t see in the sky, but they explode when they die, and their agony is brighter than an entire galaxy. This instrument to study the sky, conceived, made, tested, calibrated by our lab, was sent to NASA. It was put in the hold of the American shuttle. Launched and placed in orbit, the shuttle docked with the space station, the astronauts removed the instrument from the hold, and installed it on the exterior of the Colombus module, the station’s European module. With my lamp inside.