The Ferme du Buisson contemporary centre d’art is committed to a policy of exhibition, production and publication that testifies to its active support for contemporary art. From October 2012 to January 2013, it presented Ent(r)e, a solo exhibition by artist Loreto Martínez Troncoso. “Entre” (meaning “enter” or “between”), could be the watchword of the centre d’art itself. An invitation inscribed on the pediment of a place that prides itself on being open to all, at the junction between viewers and artists, between various disciplines. This journal shows the close, lasting relationship between the artist and the place, and how each is nourished by the other.

COME ALONG!
First and foremost it’s an invitation.
From the moment you emerge from yourself/from your home,
it means sharing something with someone else.
Moving from the inside world to the outside world…
Making yourself available.
Opening up…
Opening.

There are also word-of-mouth invitations
(in Castilian: de boca a boca or de boca en boca).
You give someone boca a boca to restore their breathing.
You’re taking care of them.
You also take the mouth of someone with or/and in your mouth when you kiss them.
Love them.

It’s a declaration of love.
To the Other.

ENT(R)E
Title of the project, the exhibition (since we are dealing with an exhibition)
But what is an exhibition? (a question I ask myself often, as my practice is mainly immaterial and ephemeral)
And/or when does it start? (thinking about the title… thinking about announcing it…)

With the “r” between brackets, we have ente in Castilian: what is, exists or can exist.
(if we put the “n” between brackets, in French it would also give “être” [to be]: In Spanish ser (to exist) estar (to be in a place, to be in some kind of state)

It is also a direct invitation.
(to you…)
To enter a place, to come into a world.
It is a summons to a meeting.
(between you and me… between you and someone else… – What’s going on?)
A meeting with a place…
Which is not an isolated place. Which is set in a landscape.
Also a meeting with everything you see, experience, pass through to get there.

But what is a place? A building? A set of people? An economy? A history? What context are we working in? Not just physical, but political, economic and social too… Who are its inhabitants and who are not?

Who determines this working context, sets it up, and how can we juggle with it? How can we appropriate it, shift it and/or transform it. Elasticize it? Because if you don’t leave it, you work with it, from it. Hence the question: Where are we speaking from?

“I’d like to explore the underground world. To set out in search of those forgotten places (…)
I would map those lost places, I would pierce holes in the foundations,
before returning to society from the underground world.”
And he goes on:
“It would be a question of bringing art out of the galleries and taking it into the sewers.”

[in 1970 Gordon Matta-Clark dug a hole at 112 Green Street to see the foundations in order to release the building’s huge, compressed, trapped forces via this simple hole: “It would have been great to be able to pass freely under a zone that used to be governed by the laws of gravity.”  (in Gordon Matta-Clark, Entretiens, Edition Lutanie, 2011)]

Considering what exists, considering what has existed, what has taken place and what is there, latent… Its history, its configuration, its transformations… Becoming aware of the way in which its architecture conditions our behaviour. Where we go in by, where we go through, and where we leave/or could leave by, or would like to be able to leave by.

–    apprehending space, meeting it, working with it, from it (with the time that involves, involves for you).
–    making hidden zones visible (tapping on all the walls to hear if there is air behind them; photos of the art centre before the last renovations: two rooms used to communicate with one another; the floors were not black… upon my arrival: the floor is covered with a dance mat).
–    revealing places that are hidden from the viewers’ eyes, and opening doors to get into places that are not accessible to the public.
–    creating openings where there are none or revealing old openings that are today walled up => for improved concentration? perception? contemplation, isolation –> loss of contact with outside, life outside, with where you are going, where you are
–    (reread Kafka’s The Burrow.)

A wall is not just a surface you hang or screw or project something on to. It is also a material, a thickness, a layer…

– But why hang something on a wall when the wall itself is a much more stimulating material? (architecture as an organism, hence living)

“And we are in hell, and part of us is always in hell,
immured as we are …
in the world of bad intentions.
(…)
Think that a simple word, a name, is enough to shake the walls with your strength.”
Pierre Reverdy, Risques et périls, 1930

–> Michael Asher’s intervention at the Teselli gallery in Milan in 1973: He threw sand at the walls to the point where he removed all the layers of paint and arrived at the “beginning”, eso sí, with the (violent?) trace of the erosion of the gesture.

…a wall: a cavity, a dwelling-place – I often think of los topos who used to live hidden behind walls and under floors during the Franco period.
…in the end not something that separates, or… that does so by default – I think of the neighbours we hear upstairs or downstairs or in the adjoining bedroom.

Would going into an exhibition not be being present, going in, experiencing this time of reading and writing?

–> the piece Samson (1985) by Chris Burden at the Henry Art Gallery, “monumental in scale”,  which is only a criticism of the institution?

–    challenging the idea we have of limits
–    (noted, further away: “prison is on the outside”)
–    (noted, close at hand: “Too much space stifles us far more than if there wasn’t enough of it” Supervielle, Jules –> also speaks about: “external vertigo” and “internal immensity” in his book Gravitations)

[+ isn’t staging an exhibition also a desire to get close to others? To their needs? But what availability do I have, what virginity? My desire… to forget myself, uneducate myself, unlearn. To leave my suitcases at the door and make myself available, to let myself be surprised. (unplanned meetings –> surprise –> coup de foudre). Borges says “art arrives”. And “for me, it happens like that: all of a sudden I feel that something is going to happen and it is at that very moment that my soul, my consciousness, is in a passive state, and I wait.”

+ where is emotion and where does this disdain for it come from. For speaking about it. – “disdain for emotions” (disdain – desprecio, distrust – recelo, rejection – rechazo) + shame at weeping, but… alone or in company? – Francisco’s story, he was moved and his emotion went “silent” when he sensed the presence of another viewer. Where has… Where has the flesh gone?

–> practices like Michael Asher’s, where it is more about perception, sensation, than analysis (I’m thinking of his piece, intervention, gesture where he created a draught in space, caused it to be felt.) Or… a terremoto, an earthquake.]

The exhibition as speech (?)
A gesture is a spoken word.
Any gesture is an act.
A spoken word act
Spoken word that constitutes an act.
A gesture that constitutes an act …
A question of who it is addressed to.
(we always address someone (?) or, a gesture doesn’t come from nowhere)
The need for an addressee (?)
An exhibition as a space of writing.
(space as a blank sheet)
An exhibition as a space for writing.
(through what is offered and also through the reading, writing of the visitor, the other – incomplete writing, writing as soliloquy, with no other)
And also a written space.
(which has already been written on by others; that is inhabited by others, by voices)
A past, a present and a future (a future unknown to us; a future “construction” created and reported on by the person who experiences it)
An exhibition as a meeting.
And when there is a meeting, a world unfolds, opens up, stretches out before me. 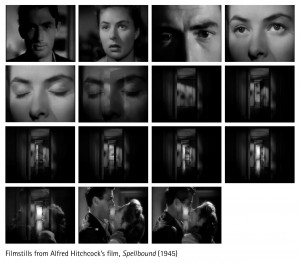 Openings… on to a boca con boca.
But how and exactly when does a meeting take place?

–    I know why you came in.
–    Why?
–    Because something has happened to us.
–    Things don’t happen like that. In a day…
–    Sometimes it takes just an instant. I was saying to myself this afternoon that it was like a flash of light. That grips us completely!