Located in Troyes, for thirty years the Centre d'art contemporain / Passages has been developing a program of exhibitions and residencies. As a structuring axis, the residency is a tool for involving the whole region, creating many opportunities for exchange. For two years, in cooperation with the National Radioactive Waste Management Agency (ANDRA), a residency has been established based on the memory of storage centres. It offers an artist the possibility of confronting a rare field of experimentation. Selected in 2012, Julien Carreyn takes an unconventional look at a previously foreign world.

Written in italics are extracts from the logbook kept by Julien Carreyn during his residency entitled “Andra in the meantime”. 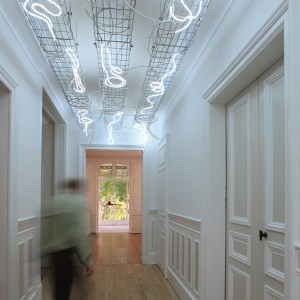 Antoine Marchand: You have just finished a long residency led by the Centre of Contemporary Art / Passages and Andra (National Agency for Radioactive Waste Management).  This kind of project cannot be considered as a “conventional” residency and brings up numerous questions, and in particular ethical issues. Did you hesitate, or rather did accepting this invitation give you the opportunity to view things from another angle, from “inside”?

This question of “how to protect future generations”, we could assume that everyone, the agency and the artists, would interpret it in the same way.  We live in the same country, speak the same language, share the same values. Upon consideration, however, we could ask ourselves if we were approaching the question from the same angle.  “Practising artists” perceive “art” as their absolute imperative. Art was difficult to define, but it was both the cause and the effect, both the driving force and the result, and serves only itself.   The artist’s ethics can therefore only be deontological: he creates what he must create, consciously, and without worrying about the consequences.  On the other hand, the issues raised by Andra reveal a “consequential” ethical theory. It is a case of “not making future generations bear the consequences of today’s choice’s”. In other words, a sort of prospective selflessness which aims to minimise the potentially detrimental effects of an action without giving any prior thought to the action’s legitimate deontology – or rather, setting aside this deontological thought since the action was clearly required by the reason of State: the ethical reflection can therefore only focus on the consequences of this initial and irreversible decision.  This meant that we could then ask ourselves if the differences in these two approaches would inevitably cause a divide between two types of ethics, or even between two absolute reasons – that of Art and that of State – whereby the latter could, rightly or wrongly, be considered as using the former in an attempt to integrate a deontological dimension that was, by defition, denied to it.
It was when I noticed this imperceptible yet radical ethical shift that I was able to understand why my work, as well as that of my predecessor (Veit Stratmann) and maybe my successors, proved itself to be the hiatus between each person’s mechanisms and expectations.   The question was nothing more than a pretext for the artists, a means to access the source of potential inspiration represented by Andra.
(…)
Not to dedicate a work to Andra and not to reduce one’s work to Andra.  To view Andra as the backdrop and to treat its corpus as a contamination of my work. To explore all the avenues where serendipity could be exploited.

I don’t doubt that the artists do not really care about helping Andra. Although it would be awfully dishonest and terribly cynical if one were to completely disregard the project’s values, pocket the 25 000 euro research funding money and get to work in the impressive designated area. 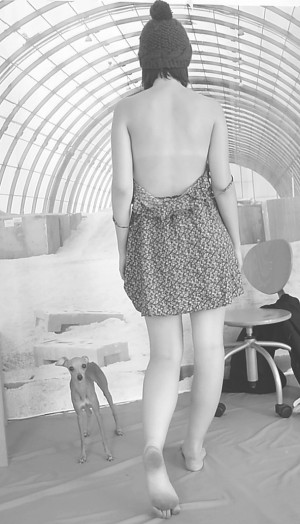 A. M.: Yet is such a stance really possible? Is it possible to wholly assume your work whilst complying with Andra’s wishes? Is it a constant work of adjustment? A reworking of Andra’s wishes? Or a new way of thinking for you?

J. C.: The problem was that in finding a solution for radioactive waste management – which was of course very unlikely – we were contributing to the pursuit of a pro-nuclear policy. Although I am not an Eco-campaigner, nor did I agree with such a policy (and it would have been difficult for the Centre of Contemporary Art / Passages or Andra to introduce a “pro-nuclear” artist). The relationship between Andra and the nuclear issue was not very clear for a lot of people. Since the agency could not guarantee the lifespan of their storage facilities, should they not have alerted their sponsor, the State (who was expecting the agency to say that everything was fine and the situation was under control), their interlocutors or their citizens to the area of uncertainty which may engender a pro-nuclear policy? Would this not have been the logic of an ethical engagement (memory group, sustainable development)? Surely not. Its role was to manage existing waste, which is already an enormous and essential task. The assertion of an ethical position was probably more to do with its public image as well as its own internal acknowledgement, like a sort of good conscience with the need to “reassure itself that it hasn’t forgotten”.  It would have been impossible to properly undertake such work with a bad conscience, and the work done needed to be the best possible.

This problem is extremely ambiguous and there are no apparent solutions. I like what John D’Agata said about Yucca Mountain, a storage project in the United States: “I do not think that Yucca Mountain is a solution, nor is it a problem. What I do think is that the mountain is the place where we are, the point which we are at – a place that we have studied extensively, more than any other place in the world – and yet which remains unknown, thus revealing the fragility of what we know”.

A. M.: I was quite surprised when you told me that you had been chosen for this residency since your practices and lines of thought seemed to me to be mismatched with those of Andra, or at least they did at the time. Are the finished works close to what you had imagined at the beginning of your residency, or has the project evolved a lot (through your discussions with Andra employees, their expectations, through your own discoveries…)?

A. M.: And from the other point of view, what do you think Andra was expecting from you when selecting you for this residency, A “romantic” vision of nuclear waste storage?  A quirky proposition which would offset the numerous polemics associated with the area?

J. C.: Andra was not necessarily expecting a work of art, but rather a study on the issue. But I couldn’t limit myself to that, to wasting six months producing nothing, just thinking about what could or could not be.  How boring. The study should be a production and not a “project” to be produced at a later date. Especially as I found it to be a rather doubtful prospect to protect future generations by burdening them with the extra responsibility of implementing a project dating from 10, 100 or 1000 years before.

2030 Andra’s administrative offices. Filed away on a little shelf are the archives of 19 “art and memory”commision responses.  The Huyghe project, the Lévêque project, the Parreno project, the Tschiember project, etc, are all there, inert, just a variation of the wallpaper, awaiting their implementation. Then the director of Andra retires, a new director takes his place and the projects will be forgotten.

The work that I have produced in this Troyes project “contaminated” by Andra consists of several series of images, photos and drawings and a logbook.  They collectively form a testament. A testament is potentially sustainable, and there is my response to the agency’s question. 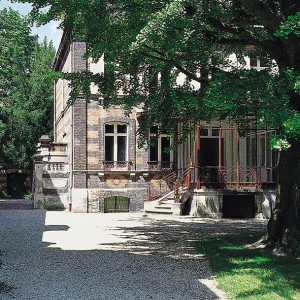 A. M.: So there is conflict between two means of envisaging these important issues, which are diametrically opposed. On the one hand we have this critical need to recycle nuclear waste, which has been delegated to Andra. This being an extremely pragmatic position relating to what you rightly call the “reason of State”, which leaves very little room for doubt or ethical consideration. On the other hand, you have your point of view as individual and artist, which is most probably against nuclear, and yet you are requested to “use your expertise” to help Andra. This is where the “ethical position” lies, that you alluded to earlier. Did you sometimes feel “manipulated” and involved in a legitimisation of Andra’s activities?

J. C.: No. Andra has its communication strategy and communications department, but this resarch was independent from them.  However, if we look closely at this communication, it is clear that the impact and challenges of contemporary art are miles away from it. The communication addresses as many people as possible with simplicity and paternalism. If I were Yannick Noah or Muriel Robin, it might have been worth getting involved in a legitimisation operation.
I would like to come back to what you said: “Your point of view as individual and artist, which is most probably against nuclear”. Yes, as an individual it is my point of view. It can also leave traces in my point of view as an artist, bearing in mind that artistic deontology only concerns art, that everything in art is allowed, whether it be true or false. Also, I could have positioned myself as the world’s first pro-nuclear artist.

A. M.: Beyond the specific case of Andra, it is actually the role of artist that is in question here. The image of an artist in his workshop, hidden away from the world, seems completely archaic today. Do you feel that your work should mirror the state of modern society? or rather absorb it?

J. C.: Is it really that archaic? Could reclusiveness and solitude not also be ideal conditions for observation?