The time of sites

The term “site”, often mentioned in contemporary art, is particularly appropriate for describing the activities of the Cairn, a centre d’art located in Digne-les-Bains in the Alps of Haute-Provence. Artists go there and create perennial works on the protected territory of Europe’s largest geological reserve. These creations are incorporated into the encyclopaedic collections of the Gassendi Museum, itself organised like a huge showcase of curiosities. Invited to work on this subject, art critic Fabien Faure reminds us of the link between the mine prospecting activities of American geologists and the history of land art.

In 1995, Nadine Gomez, curator of the Gassendi Museum in Digne-les-Bains (in south-east France) and Guy Martini, who founded the Réserve Géologique de Haute-Provence in 1984, decided to found the CAIRN-Centre d’art. At the time, they envisaged an organisation resolutely devoted to contemporary art, which, however, would take into consideration the specific nature of this rural area in the southern foothills of the Alps, just outside the Rhone Valley area. Since then, devoted to the production of works and of monographic exhibitions, the CAIRN centre regularly hosts artists in residence, for whom they propose to work “in the spirit of the places”. In other words, while the CAIRN centre was based in the Réserve géologique de Haute-Provence – that is, concretely, in the area of 200,000 hectares that it covers – many artists, in return, have devoted themselves to re-examining, interpreting and reshaping the sites that make up this area. This dialogue, which has been renewed for almost twenty years, has produced dozens of exhibitions and lasting works, particularly “on location”. It gradually developed a collection that is clearly and deliberately situated or localized. The term “site” now seems to be appropriate for anyone who wishes to test and analyse the spatiality of many three-dimensional works – which are indeed exterior, but not only. However, since we are concerned with the foundations of the work done in Digne, it may be useful to re-examine the links between recent art and the idea of site, which is itself historically determined. 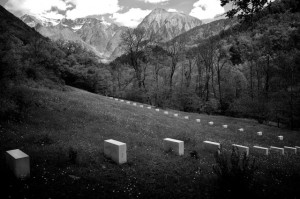 In both Europe and the USA, in the late 1960s, then especially during the 1970s, the redefinition of the term “site”, and then of the expressions in situ and site-specificity, sanctioned the introduction of this vocabulary into the lexicon of art at the time of the last avant-gardes. These ideas were then soon to experience the critical destiny that we know. This is why, nowadays, although usage tends to confuse the two expressions, their redefinition reflects distinct cultural fields. Originally, the expression in situ was used more in Europe, especially in France, where Daniel Buren used it all the time and theorised it from 1976, contributing largely to its widespread use. This rooting is not unrelated to the sort of historic substance given to in situ by its borrowing from archaeological Latin expressions, which relate to a frame of reference to which we are more accustomed in the “old continent” of Europe than people in North America. For, while geologists have been using the same expression since the middle of the 19th century to describe the study of rocks in their natural environment, archaeologists have more strongly linked their practices, methods and conceptions to the idea of in situ, thereby designating, since the same period, artefacts excavated in the location and place where they were used, since they could be presented on the very site where they were discovered. The idea of site-specificity, which is difficult to translate into French, means “work that has a specific relationship with the site that it occupies and which it absorbs in doing so”. It was coined in the early 1970s in the USA, where it has been in common use ever since then. The writings of Robert Smithson, and then especially of Richard Serra, have played a preponderant role in this cultural determination. In addition, in the USA, for because of the intensive operations carried out in a country that has vast expanses with low population density, the term “site” refers more clearly to the industrial applications of geological science than in Europe. Robert Smithson liked to blur the boundaries that distinguish museum rooms from abandoned quarries, where he found the very image of the non-site, the foil from which he tried to establish new possibilities for work in space. Parodying the prospecting programmes by mining companies, the artist significantly refers to “Site Selection Study”, an activity which we can imagine being applied to original, unexplored areas, which will soon have an artistic destiny.

Although this background now seems to be fading away and to be replaced by less detailed meanings, such relationships still determine approaches indirectly. Faced with the constitution of a geological scientific culture, of which the Digne area has been one of Europe’s major centres since the 19th century, the above aspects lead one to reconsider the work done within CAIRN, such as projects conducted in the last ten years by artists as diverse as Mark Dion, Herman de Vries, Andy Goldsworthy and Richard Nonas. Aware of the issues inherited from Smithson’s work, the American Mark Dion, at his personal exhibition in Digne in the summer of 2003, subtly developed links uniting a geologically over-determined area and an essential period of the history of recent art. 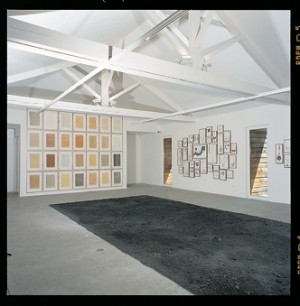 Covered by the black marl that is typical of the Digne area, the stairway construction of his Deep Time Closet (For Réserve Naturelle Géologique) cites the nominal conventions that govern the foliated order of the geological eras and, short-circuiting temporalities, freely borrows from the sedimented configurations of Glass Stratum, Leaning Strata and Smithson’s Alogons. Two years previously, during his first exhibition in the CAIRN centre, Herman de Vries had already made use of the materiality of the same black marl and the topographical and landscape suggestions that are associated with them. Regularly deposited on the floor, they formed a large powdery rectangle, passing through the entire length of the art centre’s gallery. This work, defining and delimiting an area, attested to the intense visual, tactile and spatial presence of the “things themselves”, to use an expression dear to the artist. Since then, de Vries has stayed frequently in the area.

Inaugurated in 2003, his Sanctuaire de Roche-Rousse defines a protected site. Located at an altitude of 1,400 metres, on a site that is reached after walking for at least an hour, this semi-circular enclosure bearing on a face of orange-grey limestone consists of a simple wrought iron grille: “inside, one sees wildlife, intact life. The whole process of Nature is there”, says the artist. The Sanctuaires are spaces whose inviolability puts us in the position of eye-witnesses. Their effectiveness is due to the paradoxical situation that they establish: abandoning Nature to the fate determined by its own laws and, therefore, asking us to renounce any form of interference into its territory, they suggest that we should meditate on our belonging to the world.

The Sanctuaire de Roche-Rousse contains the ruins of a modest stone construction, which it does not protect in any way from its unavoidable disappearance, but which it simply anchors in its own site to place it on view during the time while it is gradually fading away. 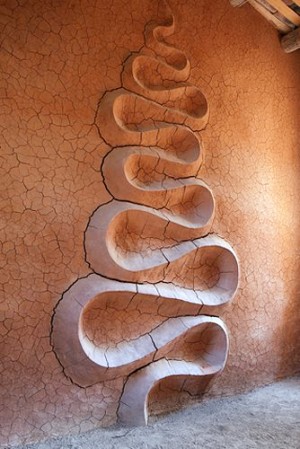 This accepted fate ignores the convenient nostalgia and the disembodied present that are established by practices of popularization and “touristification” that aim to artificially fix the remains of a disused living environment. Moreover, everywhere in the Alpes de Haute-Provence area, there are ruins – some visible, some less visible – of abandoned buildings and hamlets, which were often deserted after either of the 20th century’s two major wars. Many artists who do not pay any special attention to geological temporalities in their work, on the other hand, have been keen on these expressions of tough, dignified rurality, in which an additional “stratum” of the landscape is now revealed. This is the case, for example, for Andy Goldsworthy’s Refuges d’art works which, in blurring the boundaries between sculpture and architecture, attest in situ to the reinvention of the symbolic link that unites the built object to its past and, consequently, to the humanised area to which it belongs.

In the autumn of 2009, Nadine Gomez brought Richard Nonas to the ruins of the abandoned hamlet of Vière at an altitude of 1,200 metres, withdrawn into a warp in space and time. 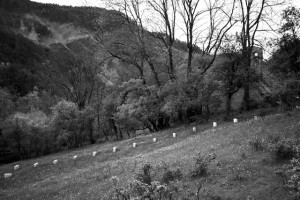 This encounter gave rise to the Edge-Stones: three alignments composed of 104 blocks sawn from white limestone in the Luberon Mountains. In Vière, as in other sites where the American sculptor has created arrangements on the ground, the lines emphasise the directions of the terrain and, according to the walker’s movements, they materialise a play of axes, bringing out the reciprocality and the relativity of different positions. With their powerful spatial and perceptual effects, they act on the place that they mark out and deploy in one same movement. Introducing breaks in the landscape in precise areas and according to defined directions, they literally open the place. For example, one of the arrangements connects the site of the former school to the remains of a mill, which was once supplied by a small canal that is now filled in. The Edge-Stones connect the Vière site, revealing the expansive force contained in the hamlet, which counters the invisible action of the mountains that set the village firmly in its own area.

Far from the stereotypes that try to present a false “Provencal” identity, the work done in the CAIRN-Centre d’art accepts the complex process which, in recent decades, has made the visual arts – and particularly the works and related concepts inherited from the history of sculpture – expressions that are open, localised and temporalised. In my opinion, thanks to this brief re-examination of some of the conceptual underpinnings of in situ and site-specificity, one may better grasp how this adventure makes sense today, and how it renews itself so that places may be invented in which places are lived.

Due to the limits imposed on this article, it is not possible to mention many other projects conducted within the CAIRN-Centre d’art, such as those by Bernard Plossu, Joan Fontcuberta, Jean-Luc Parant, Trevor Gould, Bertrand Gadenne, Paul-Armand Gette, Andrea Caretto and Raffaella Spagna and recently, as part of the VIAPAC French-Italian programme (Via Per l’Arte Contemporanea), by Stéphane Bérard, Jean-Luc Vilmouth, David Renaud, Abraham Poincheval, etc. Paul-Armand Gette, Richard Nonas, Joan Fontcuberta and Mark Dion are also associated with this programme.