With the Brass Band, Then

The CRAC Alsace is located in a building still recognisable as a 19th-century secondary school - a context that naturally leads us to raise issues addressing art as a locus for alternative experiments in transmission. The CRAC with its last exhibition "Susan Vérité" brought together artists who "recheat", and whose specific methods for soaking up miscellaneous practices and disciplines mean they turn art into a curious tool for learning. Olivier Bosson is still "recheating" here a new html fiction.

PILIPA: Yes, no, you’re right, usually it’s on Tuesday, that’s why we never cross paths. So you’re on video?
MEREM: Yes, video, great! But you know I actually started like you, with painting, and then I changed and…
PILIPA: You didn’t like painting?
MEREM: Yes, yes I liked it, but…
PILIPA: But you wanted to try something else.
MEREM: Right, and then at the particular time, too, I realized that I had more and more cameras and that I wasn’t using them.
PILIP: Umm… you mean webcams and things?
MEREM: Yes, webcams, and others too:  when we got back after our year in Romania they’d set up a relay aerial just beside where my father works. After six months, he started to have pains in his testicles, stronger and stronger pains, and my brother too! They made all sorts of claims, approaches etc, and absolutely nothing.
So at a certain moment I said to myself: that’s a waste of time, I must do something else. And so I have.
Then from there, because I liked it a lot, I tried other connected activities, more collective, like flash mob in shops, destruction of altered plants, but in the end I’ve come back to dismantling, because it suits me.
PILIPA: Yes, you’re autonomous.
MEREM: Right, autonomous. And because I also wanted something less heavy, I’ve arrived logically enough at cameras.
PILIPA: But it’s still quite physical, isn’t it?
MEREM: Physical, yes and no… already a lot less than the aerials (another thing altogether), all the more so because a lot of webcams are false and, honestly, a box is as light as a feather. And then in the end it’s like everything: if you work and practice and train and choose your tools well, it’s fine! Look at this thing for example.  I got it for my birthday and I’ve never used it.
PILIPA: It’s a present?
MEREM: Yes, I’ve kept it because I find it depressing to sell presents I don’t like online.
PILIPA: One more, one less! It’s too sad!
MEREM: Actually it’s a laser pistol, it’s sold for cameras: you stand facing the camera, you aim at your subject, you shoot, you explode the lens. Of course paper’s very good, but in reality not that good.
PILIPA: Why? It’s not powerful enough?
MEREM: Yes, yes, but the problem is a method, you can never be sure of the result behind it, because nothing’s visible. This is why we also prefer to dismantle the camera.
PILIPA: And on the shelf behind you, all those we can see, it’s you who’ve dismantled them?
MEREM swivels clockwise: Yes, well most of them! Some of them were dismantled by several of us together, or else they may be swaps—you quickly end up with lots of doubles, in particular everything to do with the street, usually you have the same two or three models everywhere. No, to find rare ones you have to go private.
MEREM swivels anti-clockwise: But if not, yes, it’s fun to be several of you too.  Do you want to come along? I’ll pay for your baptism, sister?
PILIPA: Yeah, I don’t know if my husband will be too keen, he’s rather traditional.
MEREM: Umm…well, you decide!
PILIPA: …
MEREM: Hey, it’s a quarter to! Excuse me a minute, I’ve got to go or else I’ll miss the brass band… but we can still talk if you like, I’ll switch you to the mobile?
PILIPA: Can you follow me on your phone?
MEREM: Yes yes yes, no problem! Talk in a minute!
PILIPA: Okay, talk soon!

MEREM: Pilipa? It’s me again, can you hear me?
PILIPA: Yes, perfect, and you, the picture’s okay?
MEREM: Yes, great. I wanted to tell you: your make-up’s fabulous! No, really, I think it’s really great!
PILIPA: Do you mean it? thanks :-) 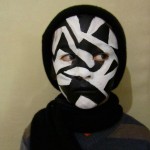 MEREM: Oh yes, really very beautiful! Did you do it yourself?
PILIPA: Yes, well, it’s based on a model of course.
MEREM: Oh yes? Tell me, I’m interested. Where did you find it?
PILIPA: They’re camouflage designs for boats, they used them to disguise warships in the First World War. Check it out, you’ll see, there are pages and pages. And it works well. With that everything’s cool, there’s no software that can identify you.

MEREM: I didn’t know about those boat things….
PILIPA: Let me tell you the history: in May 1913, at Brest, two young soldiers became naval officers. Imagine, two chums, they were really pleased, they decided to go to Paris and go out on the town to celebrate. In fact they had three really wild days, really partying all the time, and when it was time to go back to Brest they missed the train. Not by much, you know—but missed is missed. In a word, all of a sudden, there they were at Montparnasse station with no train before that evening. Not too good, right. So because they had lots of time on their hands, they said come on let’s go for a walk in the neighbourhood. They walked and walked, in the streets, you can imagine the streets. And at a certain  moment they came upon a sort of little shop where there was an exhibition of paintings. With weird pictures. Okay, they went in and it was in fact an art exhibition with modern-type things, Cubists and so on. and for them that was an experience that unsettled them. For example, they realized that looking at a cubist picture, they didn’t recognize anything, they were unable to understand what they were seeing, it was all sort of swallowed up. Even a picture depicting a female nude in an explicit posture, imitated by the very relaxed gallery owner… they looked it in vain for a long time, and didn’t see it! So a really strange sensation.

PILIPA: That night he goes to the officers’ mess with the flier in his pocket. After soup in the mess there’s often a pause and that night he uses it to circulate the image. It does the rounds, from hand to hand, everyone looks at it and it works: nobody understands a thing! Even once he’s explained that the image depicts a female nude, etc, nobody can see it, and the sexual allusions flop. And then as every night, it starts: they talk about camouflage—because, yes, I didn’t tell you, but at that particular moment the camouflage issue in the French fleet was continually exercising the minds of naval NCOs.

PILIPA: What happens? Next day at 10 a.m. we find our young officer with his flier in the admiralty offices. There, same thing, he shows the image to the admiral, and once again: nothing. Ten days later, a circular from the Ministry of War invited the navy’s painters to copy the manner of the masters of modern art, Braque, Léger and even the swarthy Picasso.

PILIPA: Obviously the military artists weren’t at all happy with this order at first. A normal reaction from rather classic, conservative professionals who were even in general quite rigid in their minds, who all felt outraged and insulted by this invitation to anarchy coming through the official channels of the very summit of the state. A bit the way you might imagine the reaction of parents of pupils when they have to sign the document where the headmistress announces that on Tuesday morning Dr. Pasteur will come and inoculate all the schoolchildren with cholera. Anyway, the army is also an organization where when you’re told to do something, you don’t think about it, you do it. So our painters heaved a last sigh, got over their pride, and did what they were told. We know from reports that they made rapid progress, and not only progress but they even worked wonders, so excited were they, and so bewitching was the spell working through them: the power to cause all the ships in the French fleet to disappear one after the other.
Legend has it that in Lorient, they achieved such a degree of skill that one April day in 1915, in that beautiful roadstead at Lorient (I don’t know if you know it? Lorient? A large roadstead with a seawall all round it?) two battleships collided: the Wagram ripped open the Bourgogne. In the manner of Juan Gris, it is said. Well, there you are, that’s the legend.

Fab’s comment :
Hi, Merem, your story reminds me of Rueil-Malmaison where they’ve visibly closed the art school to finance municipal  video-surveillance equipment, because that in fact tallied at the budget level..